0 0 Michael Salisbury Sunday, December 30, 2012 Edit this post
Great day at Mt. Abram today. They picked up 4" or so of snow overnight, and since they were already wide open we thought it would be a great day to hit Mt. Abram... and it was!

We stuck to mostly the main trails off the front face. Rocky's Run was probably the trail of the day as we hit that 4 times. They were making snow on Fearless Leader, and the wind was blowing it into this trail so the top kept filling back in each run. Loads of fun!


Another cool thing about Mt. Abram is that they let you ski the T-Bar line when it isn't running. That was the first time I had done that and it was a lot of fun! Great lift line trail. Zephyr glade had good coverage as did the lift line trail under the chair.

It was chilly and fairly windy, so any west facing trails were getting scoured off and cold to ski, but all the natural trails held loads of snow and shelter from the wind.

They are using their temporary lodge for the second straight season after their lodge burned down. Overall it does the trick but it is not quite big enough. Hopefully they can get a new lodge up for next season.

Good crowd but it was pretty much ski on the lift all day. We had a lot of fun and paid about half the money we would have up the road a couple of miles. Mt. Abram is a can't miss when the snow is on!


Here is some video of our day at Mt. Abram. Trails featured are Rocky's Run, Sindley's Whiplash, Upper T-Bar line by @MaineSkiFamily old man and an off-map glade by the boys. 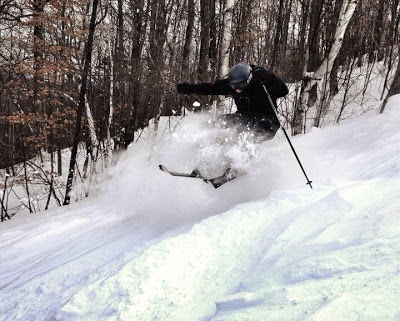