10 Years of PA Announcing in Maine 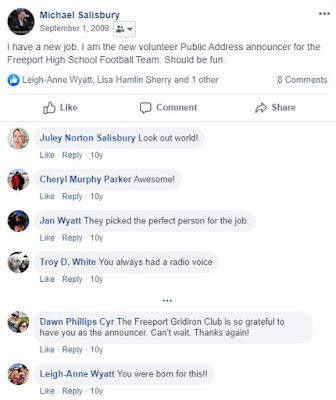 With the end of the decade fast approaching I have been reading a lot articles highlighting the top news and sports stories of 2010's. This got me thinking... how long have I been doing this PA Announcer thing? Turns out... about 10 years! Here is a Facebook post announcing my "new job" with Freeport High School Football from September 2009.

That's right - "Look out world" as my lovely wife Juley said at the time and maybe I was "Born for this" in some way as my sister-in-law said. I wrote about my PA Announcer Journey in a previous blog post. I have announced many teams and events over the past decade including Freeport High School football, basketball, soccer and track and field; Bowdoin College  football, basketball and women's hockey at Fenway Park; Filled in for the Maine Red Claws NBA G-League basketball team; UNE football; High school state championships games for Football, Baseball, Softball, Field Hockey and Basketball; Maine Sabers football and filled in for many high school teams throughout southern Maine.

I have special memories from all these teams & events and I thought as an "end of the decade post" I would write about my top 5 events I have had the privilege of being on the PA mic for.

OK this one is a little fuzzy in the memory banks and it is a tad outside of the decade (Fall of 2009) but I have to include my first ever announcing experience with the Freeport High School football program. My boys would spot for me in the booth and the fans of Freeport were kind enough to allow me to figure out how to do this PA announcing thing. There was one game at the end of this year (or could of been year 2?) where we had a 80+ yard hail-mary pass to win the game over Boothbay. I absolutely lost it with my excitement on the PA mic. Once I heard a recording of my call I was a bit taken aback. I sounded pretty goofy screaming and yelling my excitement on the microphone! I learned a good lesson to not be too much of a homer on the PA mic! I will always be grateful to the Freeport football boosters and Freeport AD Craig Sickles for helping me get my start.

I started doing PA for Bowdoin Football in 2011 and I quickly learned the annual Bowdoin vs Colby clash is one of the most historic and intense rivalries in division 3 college football. In 2013 Bowdoin's QB Mac Caputi threw a hail-mary touchdown pass to Daniel Barone with 12 seconds left to take a 6 point lead. A blocked extra point was returned for 2 points by Colby and then on the ensuing kickoff Bowdoin picked off a lateral for the final TD and a stunning Bowdoin victory.

This was a time where I had to use the PA mic to educate a good portion of the crowd that the blocked extra point return was for 2 points... not 6. A lot of the fans thought Colby had taken the lead back with that play. It was an amazing end to a great game.

In the second round of the 2019 women's basketball tournament, #1 ranked Bowdoin College was in trouble. Smith College, with recently graduated Bowdoin all-american and national player of the year Kate Kerrigan as an assistant coach, was giving Bowdoin all they could handle and held a 64-56 lead after 3 quarters.

However, Bowdoin had a senior named Taylor Choate. I loved calling Taylor Choate's name. Whenever she scored a basket I would drag out the Taaayloooooooooooooooooor as long as possible and then punch her last name Choate as short as possible. In this game, Taylor made me say her name a lot! She simply put the team on her back and scored 15 points in the 4th quarter and tied a school record of 38 points in a game leading her team to a 87-78 victory in front of a capacity crowd at Morrell Gym. It was truly an amazing performance and actually took place on the same day as my #1 experience!

This game had all the ingredients to be a classic. Bowdoin was ranked #1 in the country. Amherst #4. Bowdoin lost to Amherst in the previous year's national championship game. I was pacing around the house 3 hours before game time. Morrell gym was filled to capacity 30 minutes before tip-off. I had to announce that people could not stand in the stairways and try to find a seat. The crowd roared through the introductions and starting lineups. The energy in the gym at the opening tip was electric.

And then Amherst simply outplayed Bowdoin in the first half. Bowdoin could not get anything going. Once again, Amherst was having their way with Bowdoin. Bowdoin couldn't shoot, couldn't rebound, couldn't defend and was staring at another defeat to Amherst facing a 34-18 deficit at halftime.

One of the arts of PA announcing is to react to the ebb and flow of the crowd and help build momentum when something positive happens. I try not to go over the top. I am not going to scream into the microphone just to make the home crowd cheer when there is nothing positive is happening for the home team on the floor. However, I am going to put emphasis in my call when the crowd needs a little help getting going.

I distinctly remember the first play of the second half as Bowdoin's Maddie Hasson took a pass in the post and drove for a layup. I leaned into that call a bit. The crowd was just waiting for a chance to cheer. And cheer they did. Then something magical happened. Bowdoin scored, Bowdoin defended and with a Samantha Roy layup with 2:33 left in the 3rd quarter Bowdoin took the lead. It was amazing to be part of the crowd energy over the PA mic as the team roared into the lead.

It was a back and forth game from that point out and one of the most remarkable comebacks and games I have ever seen. Late in the fourth quarter Samantha Roy stuck a 3 to seal the victory... and I have never been happier to NOT be heard over the microphone.

In the 15 minute warm-up period before a Maine high school basketball state final it is always busy for me. I am checking lineups, obtaining the starters and reviewing player pronunciations with team personnel. I also have to make sure I have my post-game award scripts ready and the sportsmanship banners are awarded during the pre-game announcements as well.

Once I was done I had a couple of minutes to collect my thoughts and I looked across the basketball floor to the Caribou fans. They had literally filled their side of the Cross Insurance Arena with a sea of maroon. They traveled 301 miles to see if their team could bring home the championship again after a 50 year hiatus. I think the whole town of Caribou was there!

The horn went off and I introduced "The Champions of Nothern Maine... the Vikings of Caribou High School" and this wave of sound washed over me. I stopped, looked up, stared at the crowd and shook my head in amazement. To a statewide TV audience no less! I have never heard a cheer so strong and passionate. The sound doesn't come through all that well on the Tweet but you can see the expression on my face.

That look you make on a statewide TV audience when you experience the amazing wall of sound the Caribou fans produced during introductions at @CrossArena. #mesports #pagameday pic.twitter.com/pWVznEOmi2
— Mike Salisbury (@MaineSportsFam) March 4, 2019


It was an amazing game with Caribou winning in double overtime over Cape Elizabeth and taking the gold ball back to the county. This game was highlighted in The decade in Maine sports story by the Portland Press Herald and it was cool to have the best seat in the house for it.

Here is to another 10 great years calling great sporting events in Maine!