More of the Same - Great March Skiing at Saddleback

0 0 Michael Salisbury Monday, March 9, 2015 Edit this post
What a great ski season we are having in Maine! It started with an awesome opening day at Saddleback and the conditions have stayed consistently stellar all winter. Sunday March 8th was no different at Saddleback Maine.

One word of the day - the snow was FAST. It was not icy, but it was that perfect mid-20's
temperature along with a fresh coat of wax on the boards made our skis zip along the snow. It made the woods a bit tricky. Although most of the gladed terrain had great cover and you could always get an edge in, after two turns you were looking to scrub off speed - it was that quick. So if you were not quick on your feet the woods got a bit challenging.

The goomers were A+. Deep base everywhere an only minimal scratch towards the end of the day. It snowed lightly most of the day, with a couple of heavier squalls after lunch. They probably picked up an inch or so and it freshened things up a bit to make for some fun afternoon turns. Upper Professor and Jane Craig skied great and Peachy's Peril had some car sized moguls for those looking to bounce off firm bumps.

It was the day after daylight savings time switch over so it was a late arriving crowd, but by mid-day there was a nice crowd on the hill with the occasional modest lift line. Good to see Saddleback selling some day tickets.

This time of year the mountains of Maine usually get nuked with snow while closer to the coast gets more mixed precipitation. That would work for me! Bring it mother nature!

Our video edit of the day. Even the old man tried to huck the Professor cliff at 2:45 with mixed
results. Saddleback is skiing great right now. Go out and ski it! 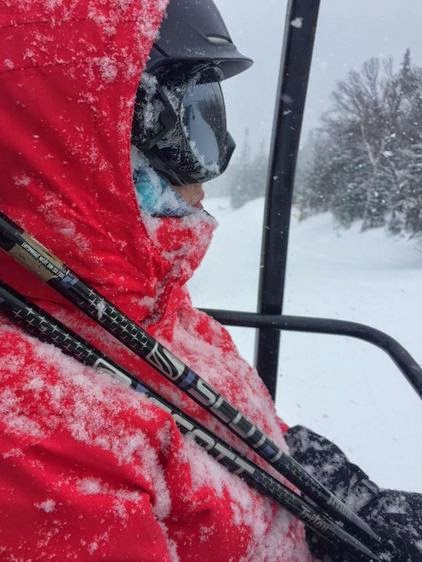